I hope there is a day, maybe a few years down the road, when a game like Saturday’s 2-2 draw at Colorado makes me feel annoyed. Dang, I will grumble, we had the lead and a golden opportunity for a precious road win, but we let it slip away. Then I will go to bed with a bad taste in my mouth.

Based on present circumstances, however, Saturday’s result left me elated. Not we-just-won-the-cup elated: it was just an ordinary game after all. It was more like walking out of the doctor’s office after learning that you don’t need surgery after all. It’s just a sprain, he tells you reassuringly, stay off it for a couple of days you should be fine. At the anticipated sound of the final whistle, I lay down on the floor of my basement and soaked in the feeling of sweet relief.
It was just a tie, I know, but for the past week the Minnesota United naysayers have been having a field day. Grant Wahl and all his cronies have been quite pleased with themselves as Minnesota United burst out of the gates only to fall flat on its face. When we lost our first game 5-1 at Portland, these fellows began to exchange smug grins. When we got torched 6-1 by fellow expansion franchise Atlanta United in our home opener, well, the naysayers threw decorum aside and began to jump up and down while laughing and pointing at us in the most juvenile fashion. "I TOLD YOU SO," they shouted with glee.
Well, the battle between good and evil is far from over, but let’s just say that Saturday’s result gave us a reprieve from these antics. In fact, when Christian Ramirez’s diving header sliced past Rapids Goalkeeper Tim Howard into the far side panel to put United up 2-1 in the second half, I’d like to think one or two naysayers choked on their drinks.
Did I mention how much I love it when my team scores? Did I mention how much I love Christian Ramirez?
It was a very short-lived lead; all told it lasted about a minute. Colorado suddenly had three guys standing open at the far post near the six-yard box and probably had time to squabble amongst themselves for a moment or two before deciding that the gentlemanly thing to do was to give Marion Hairston the honor of heading the loping cross into the goal. He clearly had the most interesting hair among the three, and would cut a good figure in the goal –scoring celebration. 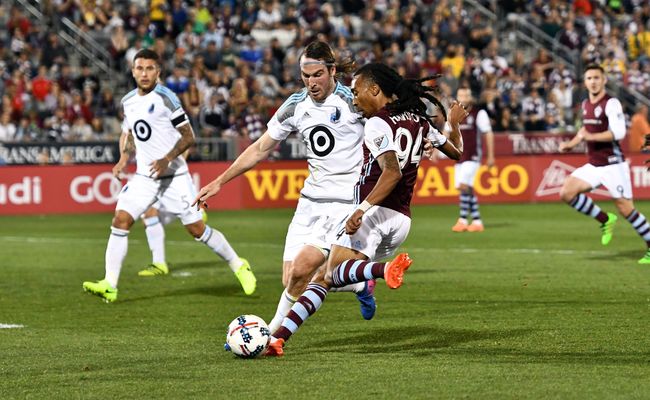 At that point, I was pretty sure things might begin to fall apart for us. It’s not just that I tend to default to pessimism during times of stress; it was the data that unnerved me. The first two games provide a pretty small sample size, but in both games we had gone pretty leaky near the end, and conceded at least one goal in each injury time.
This time, we didn’t.
Even after the referee dinged us with a pretty questionable red card to Justin Davis in the 70th minute, leaving us to scrap it out with 10 players for the duration, we held firm. Even after they had a direct kick form 20-yards out; even after they connected on a corner kick but nodded the ball just wide; even after . . . you get the idea. I still don’t know how we did it. As is customary in these kinds of games, where the good guys are clinging to a result, the last 20 minutes was not short on drama and took about 14 hours in emotional time. The two or three close chances, the odd yellow card here, the pushing and shoving there -- these were all written into this particular script to make sure I was good and wrung out by the time the final whistle came around.
But oh the relief!
Yeah I know it was just a tie. But these is hard times. Manager Adrian Heath obviously went through some soul searching this past week. The line up he presented included several big changes, including the benching of his captain Vladim Demidov to make way for local boy Brent Kallman at center back, as well as plugging NASL holdovers Davis and Miguel Ibarra into the line up. Kallman did Adrian the favor of playing the stalwart in back, looking poised and steady in the team’s best defensive effort by far. You could hear the emotion in Heath's voice during the post game interview when he praised Kallman and his teammates for their efforts.
This wasn’t just a regular tie: it smacked of redemption. The redemption we earned might be as short lived as the lead we took in the 59th minute, but still, I plan to savor it all week.

This FanPost was contributed by a member of the community and was not subject to any sort of editorial or approval process. It does not necessarily reflect the opinions held by the editors of this site.