For many folks following Major League Soccer over the years, the release of the Salary Numbers by the MLS Players Union is a bit of special day. With so many cap rules, restrictions, and funny money in the forms of TAM and GAM floating around, a look at concrete numbers can be very revealing for fans and armchair GMs alike. I for one, like to geek out over the numbers and overanalyze what they mean given a tiny sample size of the season, and an upcoming transfer window.

That said, I'm going to share some of my early number crunching (and process) with you, but not before hitting on a couple points:

Now that those bases are covered, let's talk a bit about some MLS rules and restrictions surrounding salaries, cap numbers, and cap hits. This is covered in much greater (and more eloquent) detail by Sam Stejskal on mlssoccersoccersoccer.com.
Let's start diving into the numbers then, shall we? I've ordered the players by their guaranteed salary: the closest approximation we have to cap hit. (Click to Embiggen) 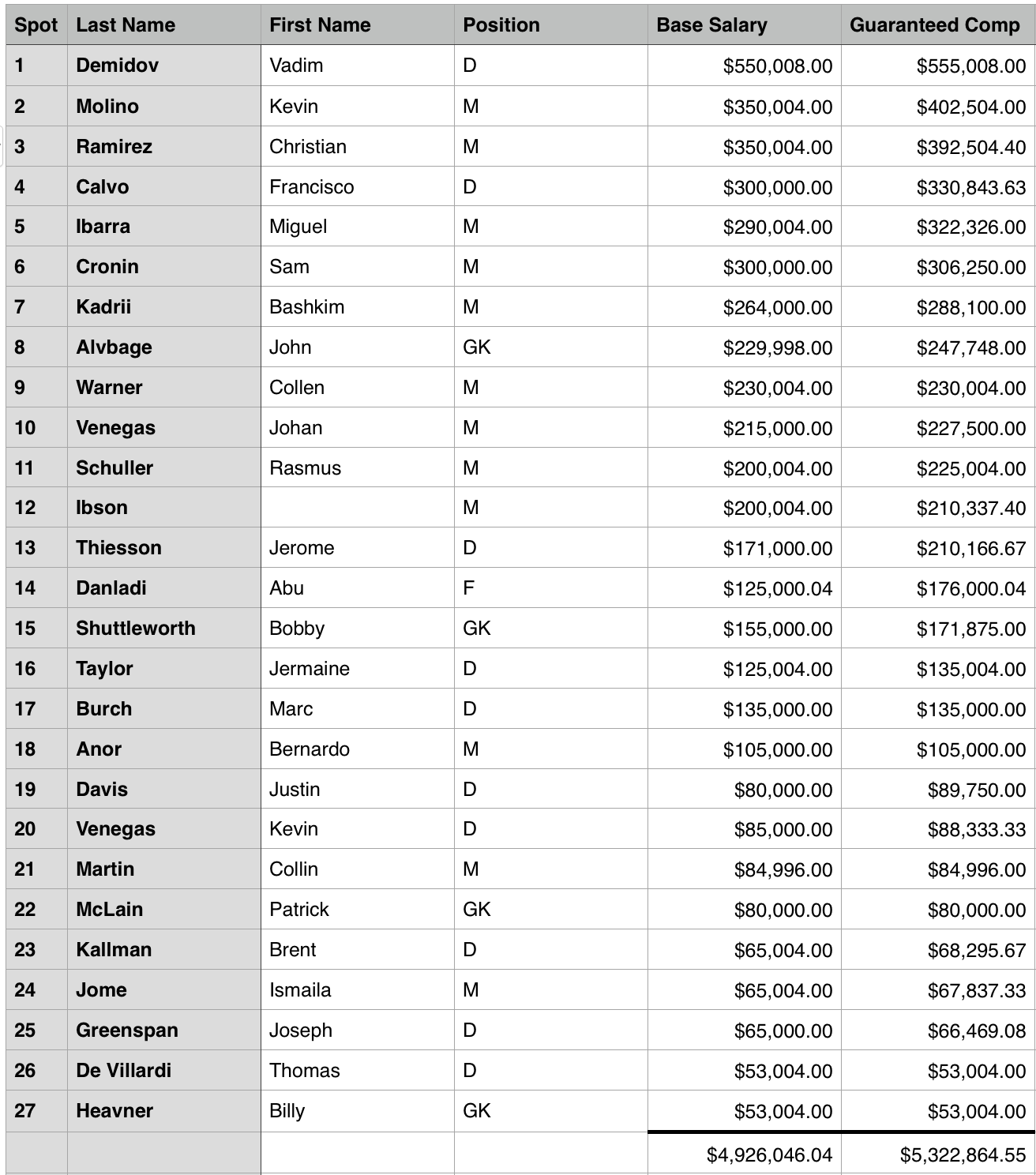 We need to break this down a bit, starting by dividing up the roster into "Senior", "Supplemental", and "Reserve" sections. 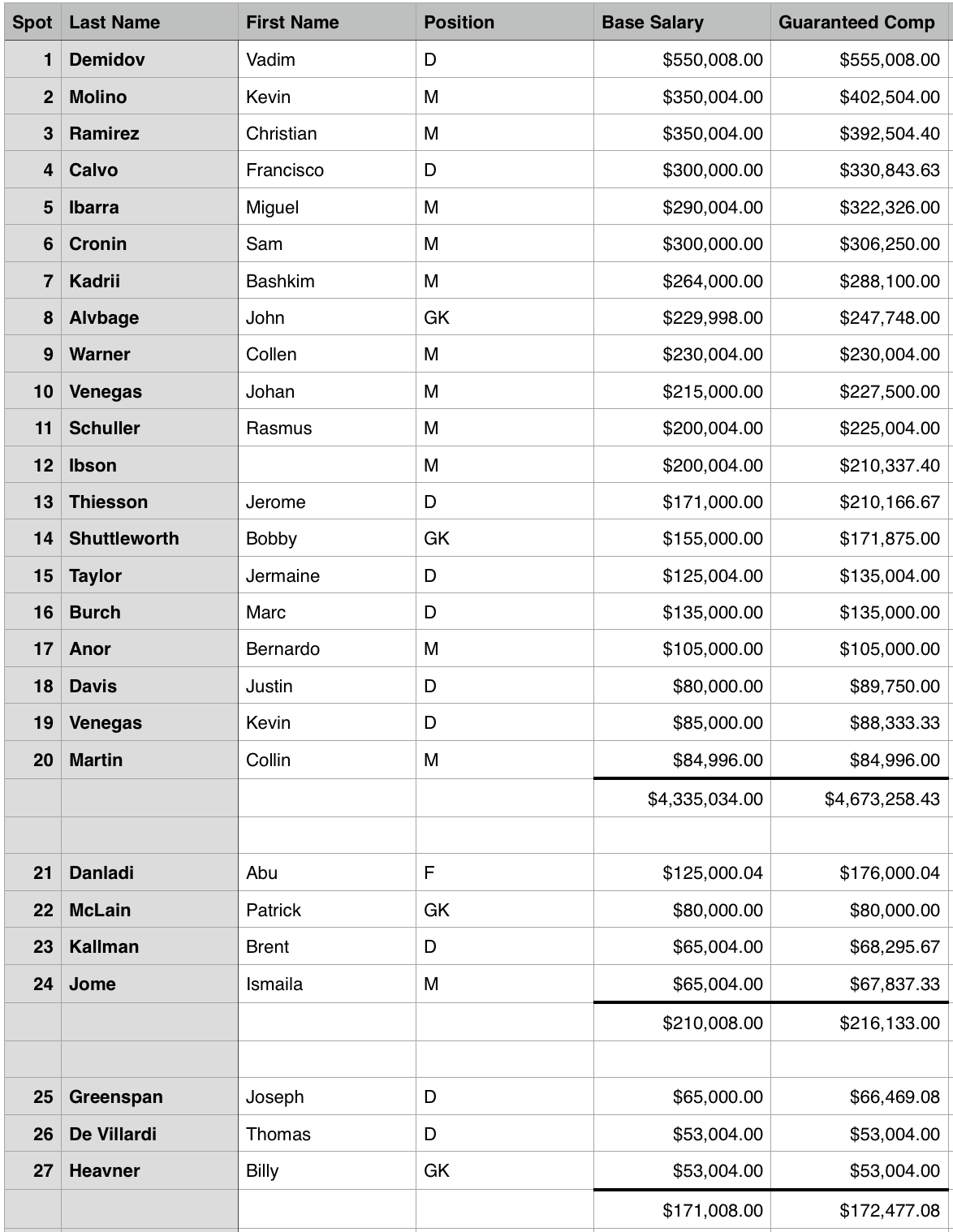 Other than just splitting them with the standard numbers, I had to move Abu Danladi (Generation Adidas) down into the Reserve section per Rule 3 above, effectively bumping up Collin Martin (a net change of approximately -$84,000 to the senior roster). We're now dealing with a pre-adjusted cap hit of ~$4.7 million. We need to get us down by about $1 million. This is convenient for the Loons because each team is granted $1.2 million in TAM, and expansion teams are granted even more, totaling $1.5 million. The question, however, is where does it go?

As mentioned in the earlier post, MLS has stated TAM has been used on 3 players; Demidov, Schuller, and Calvo. Rules stated on the MLS website indicate that the minimum salary a player can be bought down to is $150,000. So let's start there. 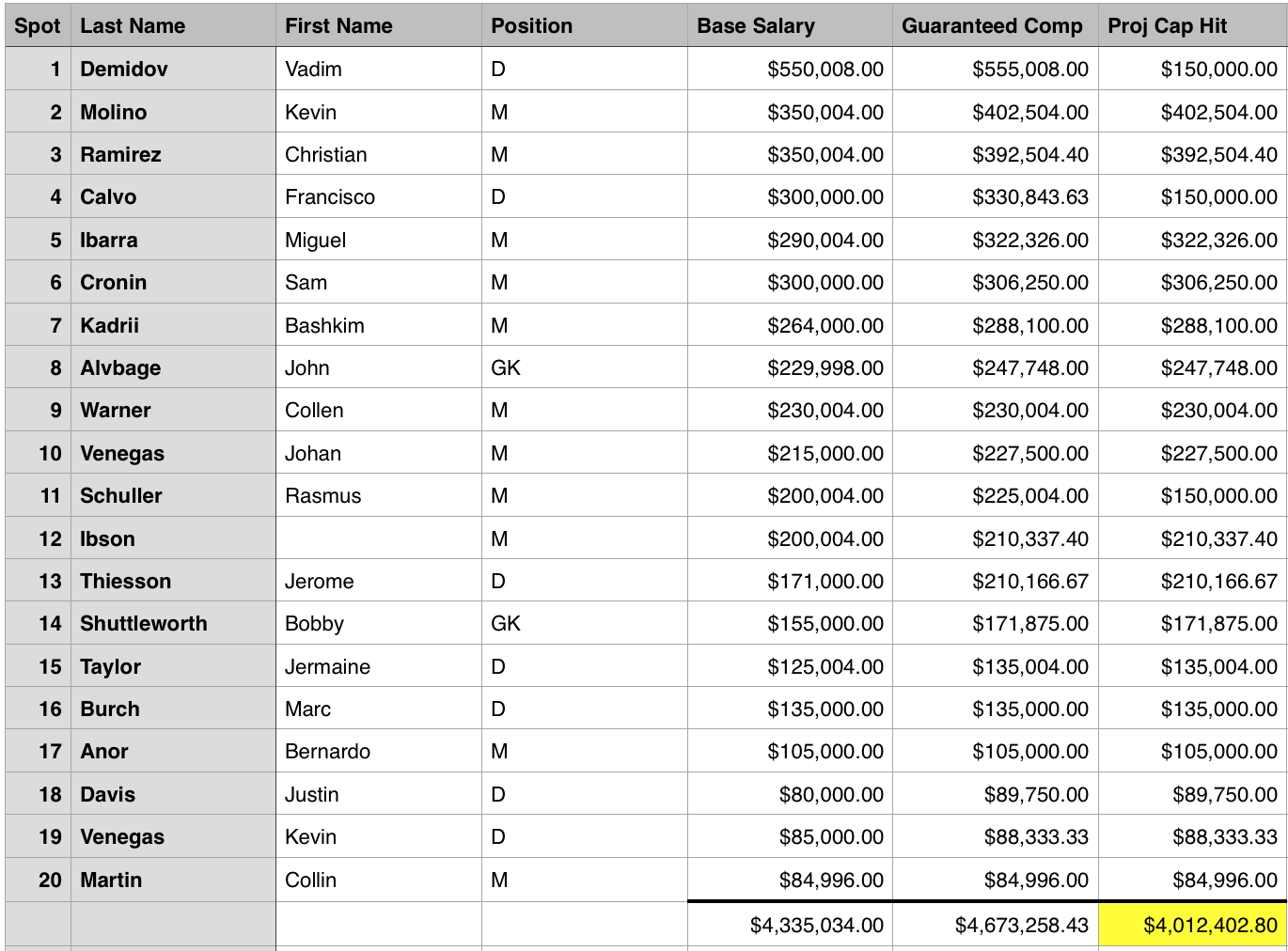 Ok, so we're still over a bit. But there is still GAM to consider, along with its own set of rules! According to a Paul Tenorio report, both expansion teams were granted $2 million in GAM. We know United used $450,000 of its record-breaking acquisition of Kevin Molino, and $50,000 for Jerome Thiesson. That still leaves around $1.5 million of the ubiquitous funny money.

MLS says GAM can be used in many different ways, including offsetting transfer fees, and signing players new to MLS. Considering a hefty portion of this squad is new to MLS, and came with the transfer out of NASL, several players are ideally culprits. However, looking to the top of the list, the only top paid players that fit the qualifications and haven't already had TAM used against them are Christian Ramirez and Miguel Ibarra. Ibarra makes even more sense, as his paid transfer fee probably utilized GAM in order to offset what would have been an extensive cap hit. Per MLS rules, GAM can only buy down at most half of an existing cap. Ibarra's cut salary alone very nearly puts us below the cap figure of $3,845,000, so we'll do the same for Ramirez. That would give us the following at only the cost of an extra $353,415.20 in GAM, leaving more than $1 million total for other deals and potential buy-downs, which no doubt happened as well. This now has the estimated cap hit down to ~3.6million. 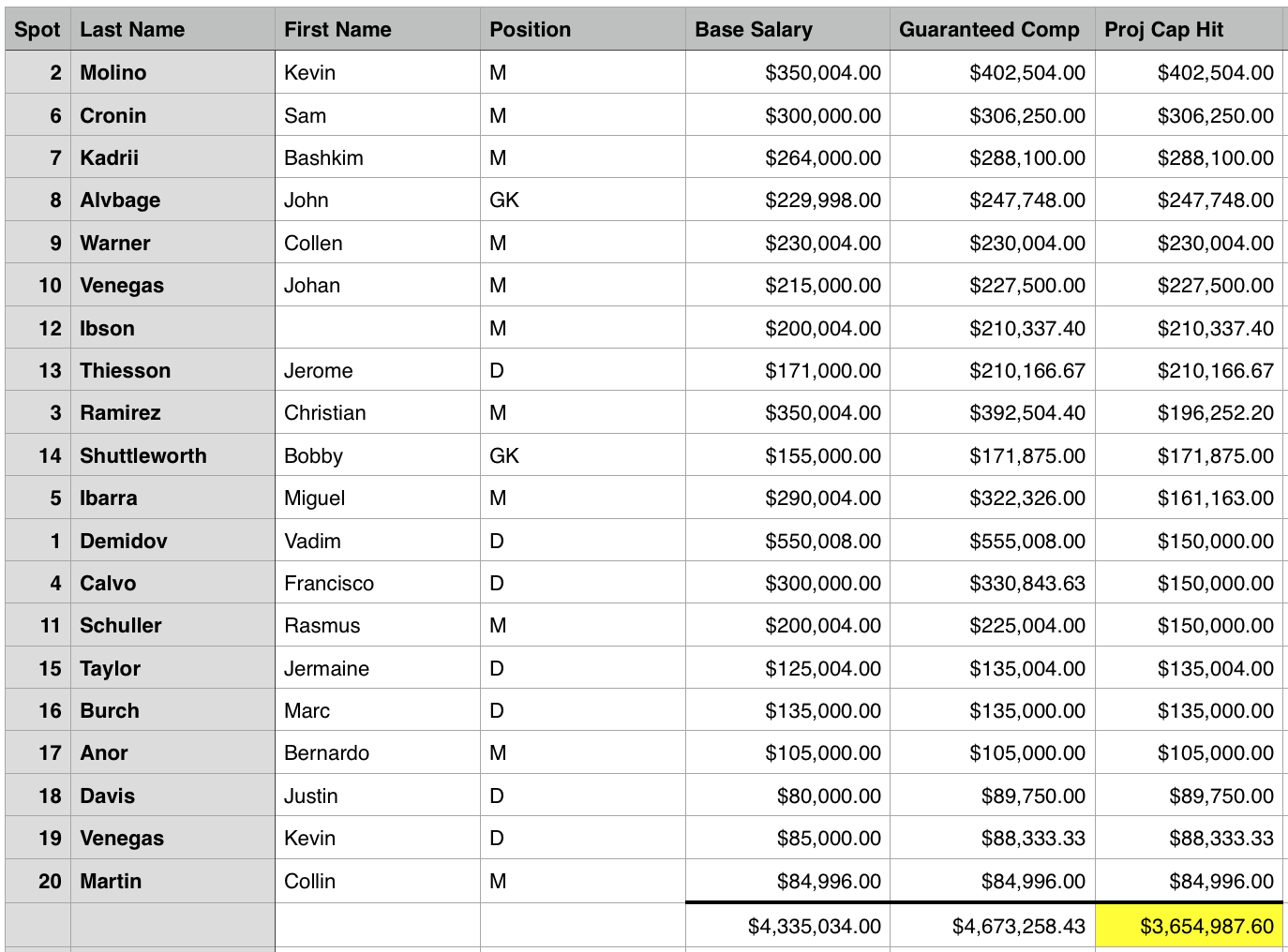 Now, this is obviously all conjecture. We don't know if United maximized its TAM usage on the three listed players. There's no real way of knowing how much of Gatt/Saeid's salaries were kept. We have no idea who else may have been targeted as well, but this is a good place to start to analyze perceived value. MLS makes it very difficult to claim a player is "over/underpaid", since they have to play a bigger game involving leagues without the restrictions we have.

I'll close part one with a small example of this. Below are 3 sheets, showing the same data, but sorted based on 3 specific criteria: Guaranteed Compensation, Projected Cap Hit, and Minutes Played. 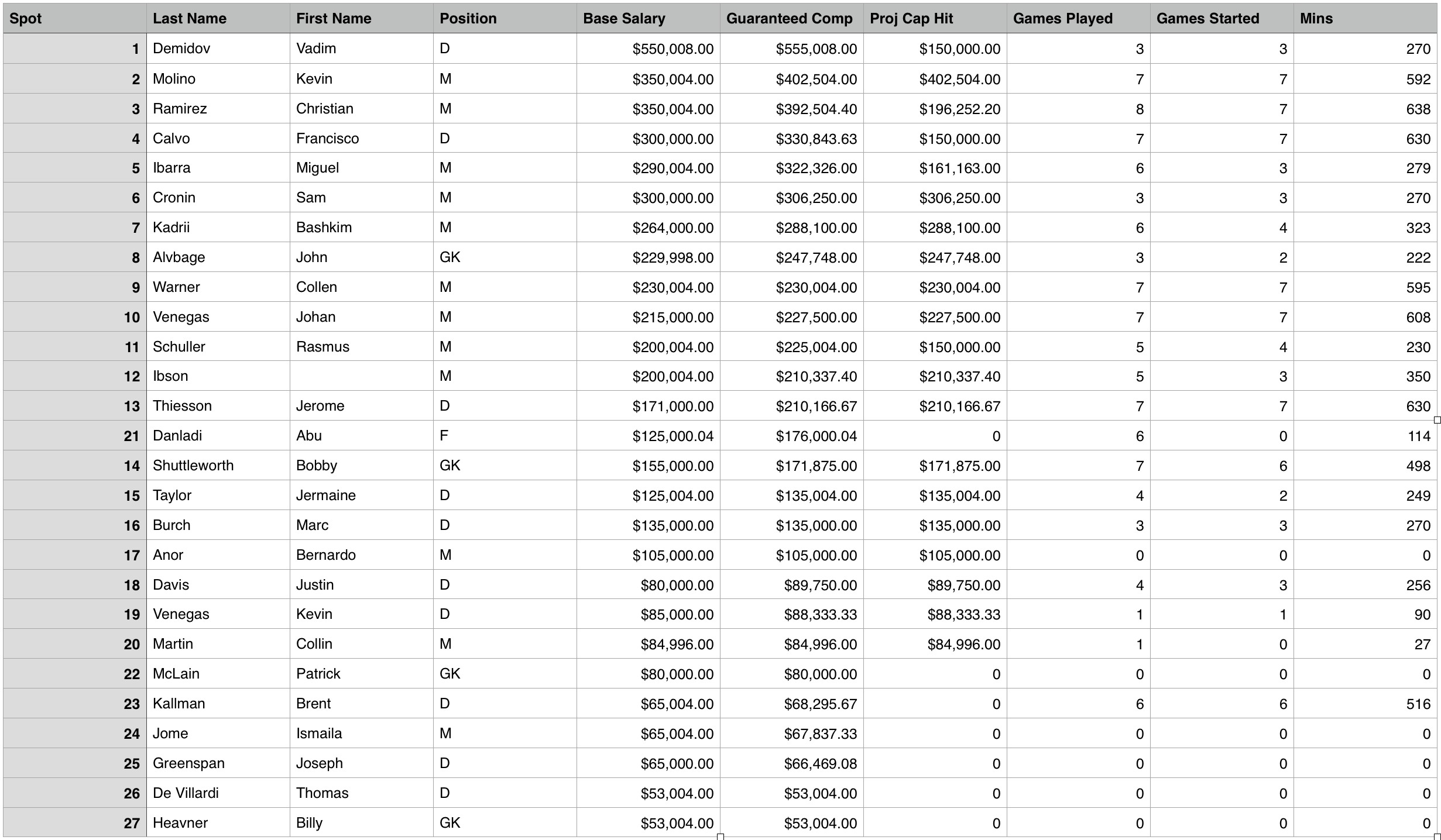 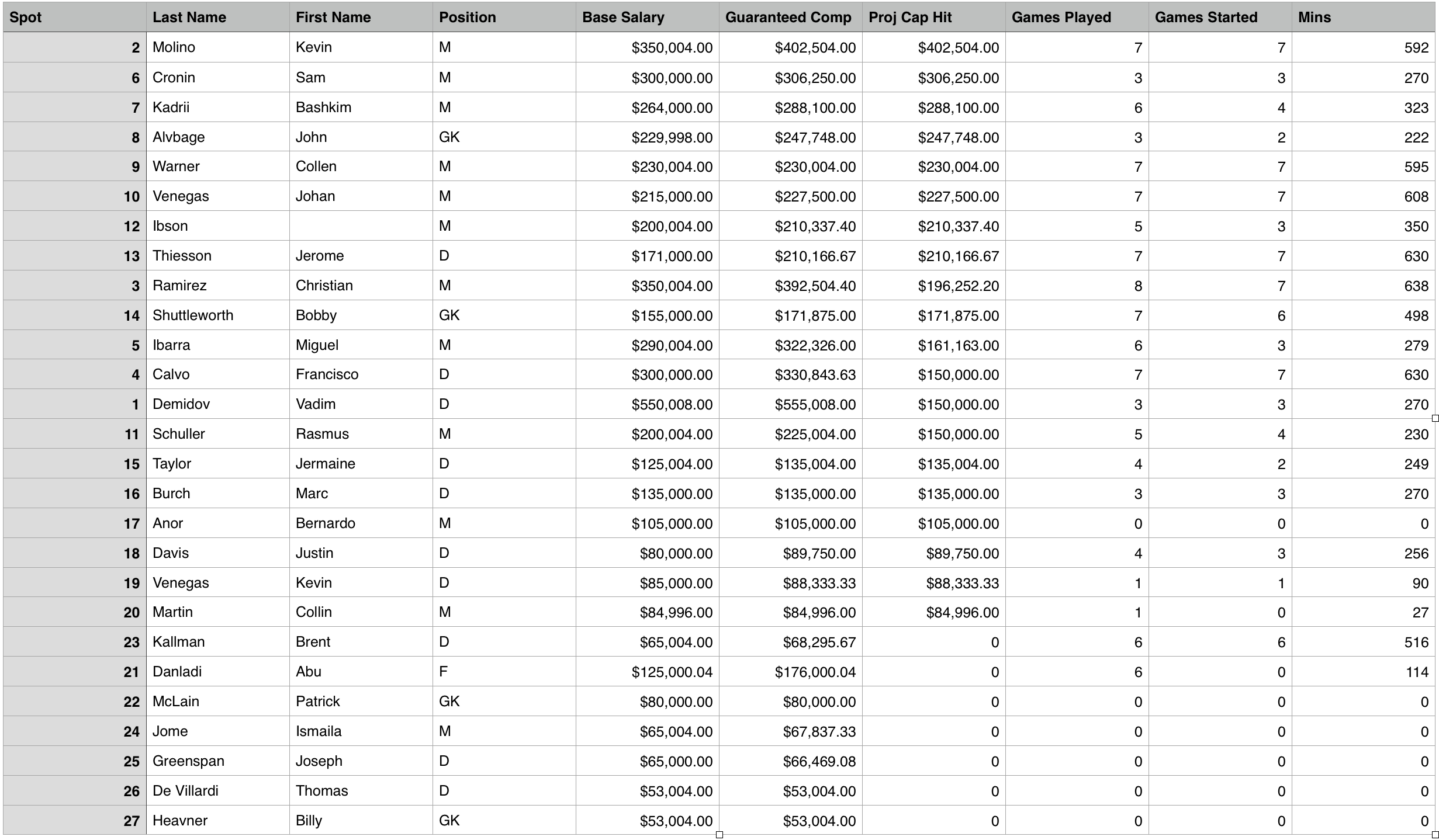 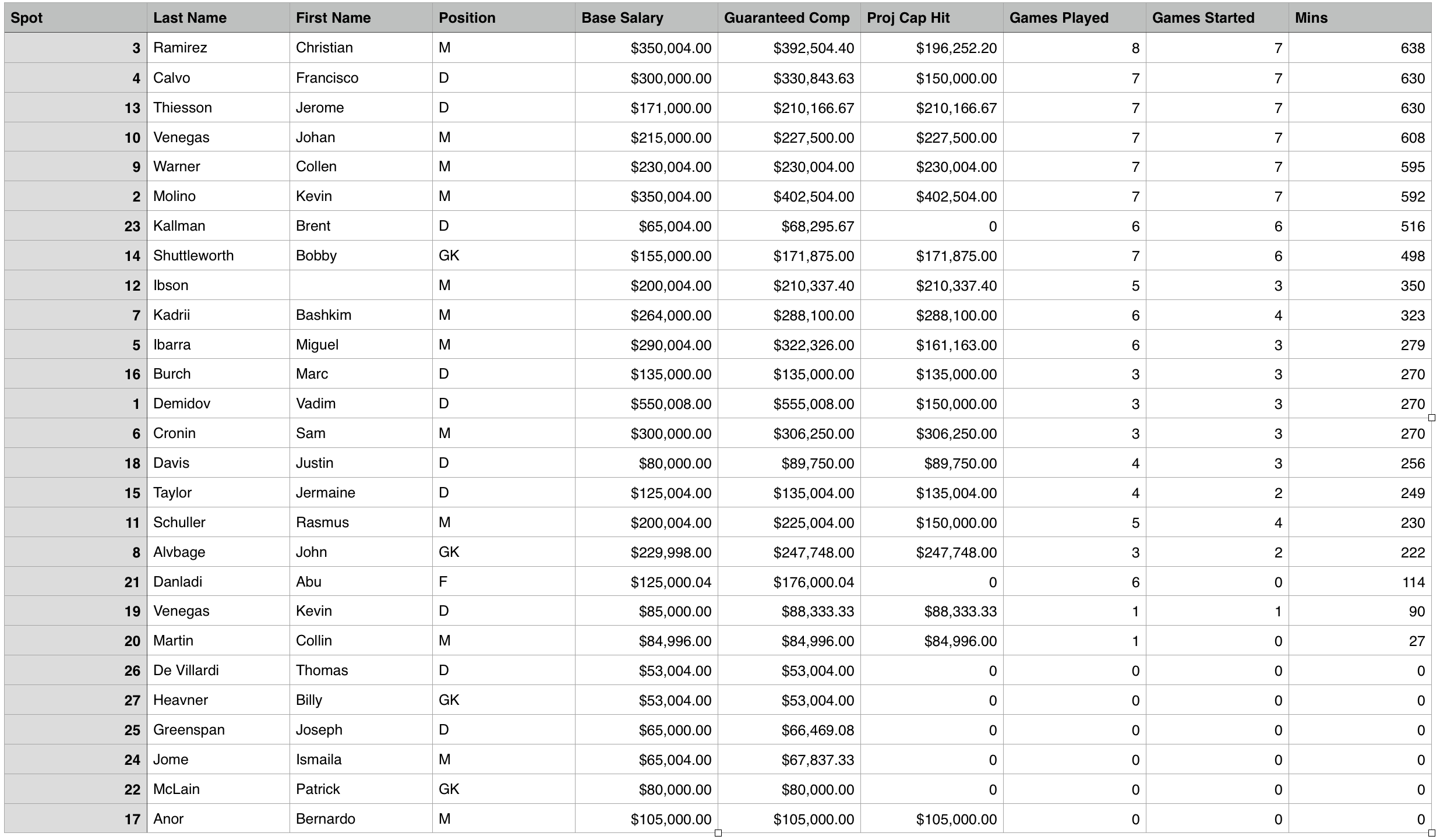 I left the "Roster Spot" numbers in place to give an indication of movement. Now, maybe I'm just doing this so that everybody will love Brent Kallman just a fraction that I do, but this is really to illuminate the cap-fu that GMs must play in order to compete in this league. We're a quarter through the inaugural season, and there are still 3 DP spots open. Even without them, this team is starting to churn out results with a squad that is playing the Salary Cap game in a very intelligent fashion.

Part 2 is going to include more stats to better indicate where money is currently being spent, and where more money should be spent.

This FanPost was contributed by a member of the community and was not subject to any sort of editorial or approval process. It does not necessarily reflect the opinions held by the editors of this site.